Earlier this week, the online version of 9News in Australia published an interview with the father of an 8-year-old boy from New South Wales who tried twice to take his life while on antidepressants.

The intellectually-gifted boy, given the pseudonym “John”, had been struggling with social situations and having meltdowns, and had recently been given a diagnosis of mild autism.

He was then taken to see a paediatrician, who prescribed John the SSRI antidepressant Sertraline, aka Zoloft, to treat his anxiety.

John’s father said that there was very little discussion about the possible side effects of the antidepressant: “His paediatrician and the clinical psychologist both said it was a very mild drug. They said that we do this for lots of children with a high success rate and with no significant side effects.”

At first the medication seemed to be working: “He did appear to have…some improvement in how things were going. He was having fewer meltdowns and he was managing his day-to-days ok.”

However, about six to seven weeks after starting the medication, John had the first of several major meltdowns, and soon his behaviour started to escalate into frightening new territory – John began telling his father: “Just kill me dad, I want to die.

“Then he tried to jump out the window and he tried to strangle himself. It was just a frightening and really tough time for us when that was happening.”

Immediately after the suicide attempts, John’s parents took their son to the local hospital emergency department, where he was assessed by a mental health worker. A decision was made to wean John off the medication.

But, from there, the nightmare wasn’t over, with the family being told that they were legally obliged to send their son to school, while he was dealing with the effects of being taken off the medication.

“In this midst of all of this calamity, we were having to take him to school and then in 20 minutes the ambulance would be called. And then the police would be called because he was running away. So you can imagine the extra stress that was placed on us because of that, as he was going through detox. They were frightful days.”

In September 2017, the results of an investigation into John’s treatment were published. Amidst a liberal coating of whitewash, the Health Care Complaints Commission (HCCC) found that there was no evidence that the boy’s paediatrician, psychiatrist and all other medical staff involved had not provided a reasonable standard of care.

John was no longer taking any medication, and had shown no signs of being suicidal since he had stopped taking the drug. Against the odds, he had “a really good year last year.”

“He still has his autism of course. He still has his anxiety too, but we are managing. He moved schools, which helped. And he will now be changing again to an opportunity class for gifted kids. He is a lovely kid, who is scarily intelligent, but struggles socially and has this anxiety that affects him every so often.”

John’s father said that parents needed to be told in no uncertain terms about the potentially dangerous side effects of antidepressants: “You are brought up to listen to the doctor and believe everything they say. You’re told they know what they are talking about and you don’t. If they say you do something then you basically go and do it. You trust them implicitly…We took the doctor’s advice and it was only when everything went wrong that we realised that actually we should have taken more care in that. We didn’t appreciate the risks involved.”

Last year, I read an article which revealed that a number of Australian parents are involved in the Australian Antidepressants Class Action, over the use of GSK’s Aropax (aka Paroxetine or Seroxat) on children. 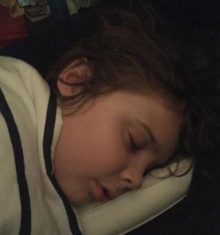 These include Donna, the mother of Seth (right), who was first prescribed  when he was 5 and, at the time of writing, 5 years later, was in a psychiatric ward of a Sydney hospital while withdrawing from Aropax.

It seems timely, therefore, that next month a lecture tour of Australia and New Zealand is to be undertaken by Peter Gøtzsche (from Denmark) and Robert Whitaker (USA), entitled Mental Health in Crisis. They will be supported by David Carmichael (Canada), Maria Bradshaw (New Zealand) and Melissa Raven (Australia).

The introduction to the tour on the website explains why it is so important to raise awareness of the causes and solutions for the current mental health crisis:​

“The current societal usage of psychiatric drugs does far more harm than good. This can be seen in the rising rates of disability due to mental disorders that has occurred in country after country that has adopted widespread use of these drugs.

“The scientific literature reveals why the disability rates have risen so dramatically. Although the public was led to believe that the drugs “fix” chemical imbalances in the brain, the drugs do no such thing. The biological causes of mental disorders remain unknown, and research has shown that psychiatric drugs, in fact, create a “chemical imbalance” in the brain. This is why many people become dependent on them and suffer terrible withdrawal symptoms when they try to taper off them.

“Once this literature is known, it raises the question of how the drugs should be used, or whether they should be used at all. This knowledge also reveals a need to provide support to help people taper slowly and safely from these drugs.

“We need a new paradigm for psychiatry, one that involves a radical rethinking of the use of these drugs, and a focus on the use of non-drug therapies for helping children and adults struggling with psychiatric difficulties.”

The mental health crisis, caused largely by the over-prescription of antidepressants, is not confined to Australia and New Zealand, but exists wherever Pharma is dominating the agenda. There is an urgent need for a similar initiative in this country to raise awareness of the harm being done to adults and children alike. As long as our doctors and psychiatrists refuse to provide informed consent and fail to adhere to NICE Guidelines, patients (and their relatives) are likely to discover in time that their prescribed medication has done more harm than good.