Last month, the Manchester Evening News published an account of the first day of the inquest of a 16-year-old schoolgirl who had been struck by a train at a station in Greater Manchester in September 2018. As I have been asked previously not to publish the girl’s name, I am not including any hyperlinks to the article or details of the location.

On the first day, the girl’s mother told the inquest  that her daughter “had a happy and healthy childhood. She was a very active child and enjoyed climbing and other outdoor activities. She excelled at school and was particularly good at creative writing. [She] was aiming to go to Oxford and wanted to become a writer.”

However, when she was 14, she “was seen by her GP who diagnosed her with anxiety and depression, and recommended she attend counselling.”

Following the diagnosis, she “suffered from severe mental health issues”  and was then “diagnosed with autism.” She was prescribed Sertraline, “but stopped taking the tablets after complaining they made her feel ‘funny’.”

In February 2018, the girl was admitted to an acute mental health unit in Greater Manchester  for young people aged 13 to 18. Her father said that he did not believe that this unit was appropriate for someone with her diagnosis. It could sometimes be busy, noisy and had a quick turnover of patients. He added: “There were a lot of things that just were not suitable for someone with anxiety. I just can’t see how anyone would think someone with social anxiety could go into that unit and feel any better.”

She stayed at the unit for three weeks, but was re-admitted in April. However, due to lack of staff, she was temporarily moved to a unit in Cheshire, where she “seemed a little bit better at first and agreed to take Citalopram.” She was discharged in May, and the court heard she had made threats to end her life if she was sent back to the unit.

At the end of the first day, the report concluded by stating “The inquest is expected to hear from a number of health professionals who were responsible for [the girl]’s treatment.” However, no further reports were published in the MEN, or in any other newspaper, until today.

It was reported that, in her conclusion, the coroner identified key failings in the care of the teenager, including the failure by the local social care team to undertake a “meaningful‘ assessment in the girl’s case. The court heard that the girl was at a risk of social isolation, and that the social care team could have provided vital assistance such as respite for the family, or a personal assistant for the girl.

The inquest had heard previously that school had been of great importance to the teenager, and the thought of leaving school “terrified her.” The coroner highlighted an “inexcusable” failing by the girl’s school to put a suitable plan in place for when she left school.

The coroner delivered a verdict of suicide and concluded by stating that, while the failings outlined caused her “great concern”, they did not lead or contribute to the girl’s death.

The coroner did not make any mention of the reckless prescription of psychotropic drugs such as Sertraline, Citalopram and whatever else may have been prescribed to the girl in her formative years. These are known to have the potential to induce akathisia in children, consequently increasing the risk of suicide. This is one of the reasons why many experts, such as Professor Peter Gøtzsche (below), consider that SSRI antidepressants should not be prescribed to children. 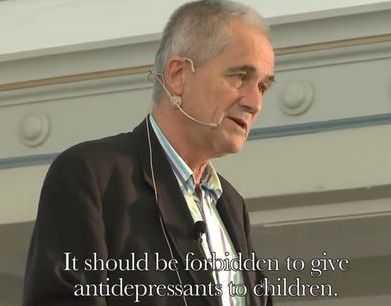