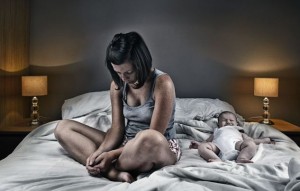 Recently, the BBC TV documentary series Panorama exposed cases of birth defects brought about by the anti-epilepsy drug Epilim, and the antidepressants Seroxat and Citalopram. The programme is available to watch on YouTube. 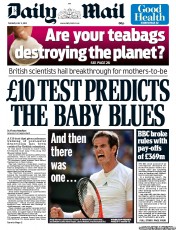 With timing that is unlikely to be coincidental, the following morning’s Daily Mail led with the story of the development of a test that can determine whether an expectant mother is likely to suffer from post-natal depression (PND). The report states:

“On a large scale, the cost could be as low as £10 a patient and the results available the same day. If a second test confirmed the disease, women could be offered more practical support after the baby is born or encouraged to take up exercise, which is known to help ward off depression.

“Prescribing anti-depressant drugs in pregnancy is another option. Doctors would have to decide that any risk of the drug harming the unborn baby was outweighed by the benefits to mother and child.

“Following birth, Prozac and similar drugs are prescribed even to women who are breast-feeding, because the chance of harm is thought to be very low.“

Because of Panorama and other evidence, it may be that the reprehensible pharmaceutical companies miss out on prospective customers at the beginning of their pregnancy. If this test becomes commonplace, however, they can hope to catch up with them a few months down the line.

As you might expect, what worries me most is the adverse reaction that can lead to suicidal thoughts. To prescribe antidepressants before what is termed the “disease” is confirmed would be another example of the dangerous practice of “pre-emptive prescribing” that I have mentioned before on this site.

I do not feel qualified to form an opinion on the chances of untreated PND culminating in harm to mothers or babies; all I have to offer is what I found in my research.

I came across a number of inquests into the self-inflicted deaths of young mothers where there was no mention of medication in the report. However, I do not recall a single case where the suicide of a young mother was attributed to untreated PND. On the other hand, I found a number of distressing reports of deaths linked to the prescription of antidepressants for PND. Here are some of them:

Navjeet Sidhu, 27 (Middlesex). ADs changed repeatedly. Threw herself & her 2 young children in front of a train

Every one of these cases represents a heart-breaking family tragedy. As a society we have yet to find a way to provide meaningful support for mothers and their children in this vulnerable situation. Clearly, the solution is not being found in prescribing mind-altering medication.

Antidepressants and Pregnancy by Anne O’Beirne