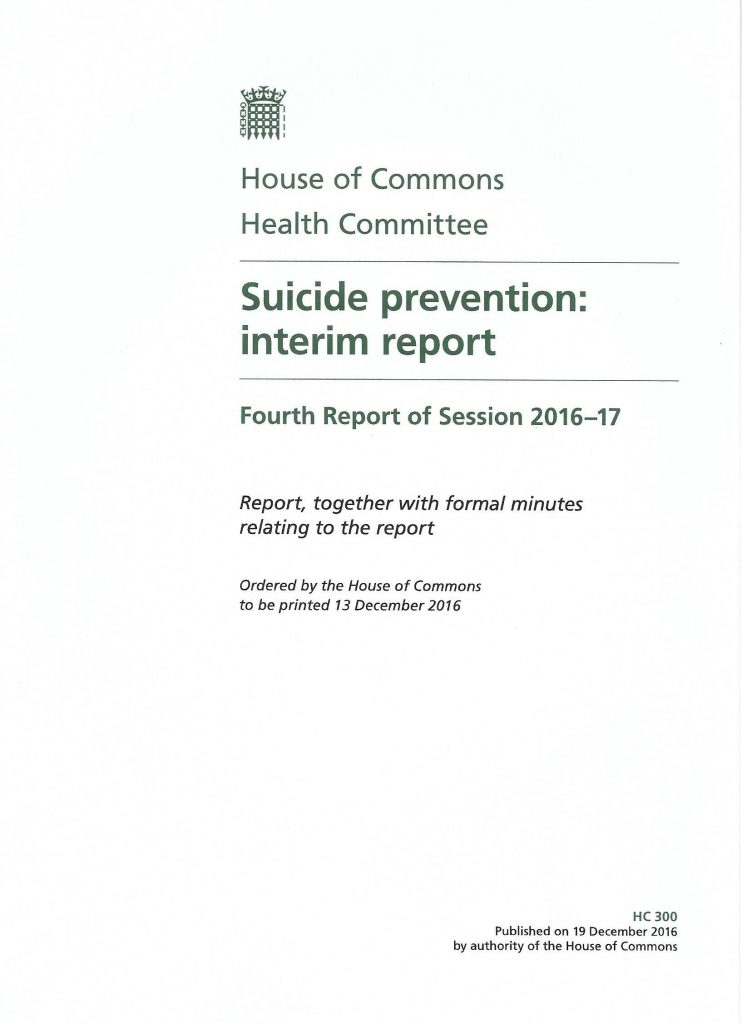 Today saw the publication of the interim Suicide prevention report, published by the UK Government House of Commons Health Committee, and summarised on the Government’s website.

Four months ago, I accepted the invitation given by the Committee to submit evidence on this subject. My evidence was included among the list of submissions which were published:

We are told that there are at present over 5 million users of antidepressants in the UK. Although these drugs give support to a large number of people with severe depression, it is evident that antidepressants are being prescribed, contrary to NICE Guidelines, to those who are not clinically depressed, and to whom they are likely to do more harm than good.

In 2009 my son, who had never been depressed in his life, went to see a doctor over insomnia caused by temporary work-related stress. He was prescribed the SSRI Citalopram, and within days he had taken his life. At my son’s inquest, the coroner rejected a suicide verdict, but delivered a narrative verdict, citing Citalopram by name as the “possible cause”.

After the inquest, I noticed that what happened to my son was far from unique. Eventually, in 2013, I began the “AntiDepAware” website. This includes links to reports of inquests held in England and Wales since 2003, most of which have been discovered in the online archives of local and national newspapers. It must be noted that this list is far from exhaustive but, even so, contains over 4500 reports on self-inflicted deaths, all of which are related to use of antidepressants.

As my research continued, certain trends became more noticeable, so that I was able to conclude that the link between antidepressants and suicide is heightened:

Much of my research has been directed towards children who have taken their lives after being prescribed antidepressants.

Because of the acknowledged risk of suicidal ideation, NICE Clinical Guideline 28 lays out three criteria, all of which must be met if antidepressants are to be prescribed to children under 18.

In other words, NICE regards the prescription of antidepressants to children as an absolute “last resort” option. Nevertheless, antidepressants continue to be prescribed to children in ever-increasing quantities, in total contravention of NICE Guidelines.

I have also researched the over-prescription of medication for ADHD. This has been shown to lead to conditions like bipolar disorder in teens, which in turn has been mis-medicated with SSRIs.

Last year, I was contacted by a Human Rights organisation, asking permission to use my article The Lost Children as part of a submission to the United Nations Committee on the Rights of the Child in Geneva.

In June, the UNCRC published their investigation into children’s rights in the UK.

Sections 59-62 of the report dealt with mental health. Here, the committee voiced their concerns over the over-medication of children.

They reported that ”The actual number of children that are given methylphenidate or other psychotropic drugs is not available”, and that: “There is reportedly a significant increase in the prescription of psycho-stimulants and psychotropic drugs to children with behavioural problems, including for children under 6 years of age, despite growing evidence of the harmful effects of these drugs.”

One of their recommendations was to: “Ensure that prescription of drugs is used as a measure of last resort and only after an individualized assessment of the best interests of that child, and that children and their parents are properly informed about the possible side effects of this medical treatment and about non-medical alternatives.”

Earlier this year, the World Health Organisation had raised concerns about the rising level of antidepressants prescribed to children in the UK and other countries.

I don’t believe that the government has made public its response to either the UNCRC or WHO.

If prescribers in both the public and private sectors continue to ignore the guidelines published by NICE and the BNF, the numbers of adults and children who take their lives will continue to rise. These deaths are preventable. 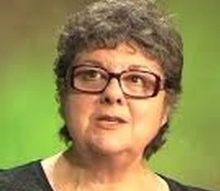 Among other names I recognised on the list of contributors were Bob Fiddaman, Leonie Fennell, David Healy and Millie Kieve (right), writing on behalf of APRIL.

Many of those who submitted personal stories of loss found that their submissions would not be published alongside the others. I was informed by a bereaved person that “these accounts are in some places distressing to read, particularly so for readers suffering from mental health problems, and so may not be appropriate for publication.” Some of these would, inevitably, have contained an account of a suicide preceded by antidepressant-induced akathisia.

On November 29th, I watched the proceedings live, waiting to hear what was to be said about the acknowledged link between SSRI antidepressants and suicide.

The witness who dealt with this subject turned out to be a man who introduced himself as: “Carmine Pariante. I am a professor of biological psychiatry at the Institute of Psychiatry, King’s College London, and a consultant psychiatrist at the Maudsley Hospital.” 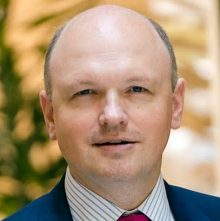 Although I had never heard of the man before, my suspicions were raised immediately.

After all, King’s College sometimes appears to be the academic wing of Pharma. Within the past year, it even invited Erik Nordkamp (left), the managing director of Pfizer UK, on to its board of directors.

It has also employed the likes of Professor Allan Young, whose opinions convinced nobody when I heard him speak in Parliament earlier this year, and Professor David Taylor, who once misled a jury at a murder trial, telling them that Sertraline was so safe that pilots were allowed to fly planes while taking it. Both of these professors have financial links to a number of pharmaceutical companies. 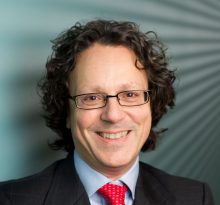 It was, then, no surprise to find that Professor Pariante (right) has been funded by Johnson & Johnson (who make the anti-psychotic drug Risperdal), as well as by the manufacturers of the SSRIs Seroxat (GSK), Sertraline (Pfizer) and Citalopram (Lundbeck).

This is the complete opposite to any statistics I have found, where there is an obvious correlation between the increase in antidepressants prescribed and the number of self-inflicted deaths, and where areas with the highest prescribing rate also have the highest suicide rate.

He also said that: “There is a small number of individuals for whom, because of their predisposition to increased tension, anxiety and irritability that some antidepressant medication gives, this inner tension, irritability and feeling of jitteriness and so on raises the risk of having this impulse of suicidal thoughts.”

What the professor is describing is life-threatening akathisia which, according to the professor, “should not be something that prevents us from using antidepressants in people who need them, including children and adolescents who need them.”

These would be the same children and adolescents whom, as I pointed out above, NICE considers should only be given antidepressants as an absolute last resort, because of the heightened risk of suicide.

The professor completed his evidence by stating: “The key issue is under-treatment. There is a small proportion of patients who suffer side effects, which is outweighed by the benefit.”

Today’s Interim Report effectively disregarded evidence about antidepressants in the contributions, either published or unpublished, when it concluded: “Whilst we heard concerns in some written submissions about the role of drug treatments and suicide, the evidence we heard from Professor Louis Appleby, Chair of the Government’s suicide prevention advisory group, and Professor Carmine Pariante of the Institute of Psychiatry was that there is greater risk from not using medication where appropriate, provided that this is following evidence-based guidelines.”

This comment is acceptable only if the “guidelines” are those laid down by NICE, who do not accept that an antidepressant should be prescribed to an adult for anything less than moderate to severe depression, and who stipulate much more rigid conditions for prescribing to children.

I am not sure why Professor Pariante was chosen to be the definitive voice on the use of antidepressants.

David Healy (left), who contributed to the submissions, is acknowledged to be one of the world’s leading experts in the field, and has already spoken in Parliament. I have no idea whether he was invited to attend the proceedings.

When I attended the afore-mentioned event where Allan Young spoke, several prominent psychiatrists and pharmacologists were present, including Peter Kinderman, Sami Timimi, Joanna Moncrieff, John Read and James Davies. Any of these would have been able to give a more accurate account of the connection between antidepressants and suicide. Moreover, their evidence would not have been tainted by links to Pharma. 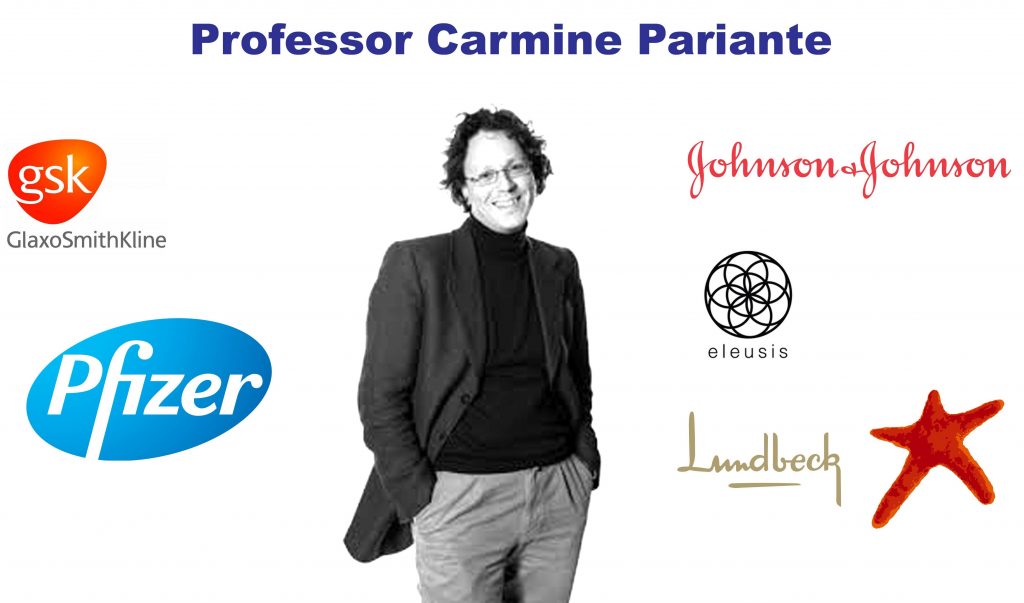 One Reply to “Suicide Prevention: a Conflict of Interest”